Skip to primary content
Skip to secondary content
First and foremost, they are not stupid.
At times their personalities more than shine through.
Most learn to control their tempers, though
I‘m certain that it’s only to placate us human members.
Love is given in abundance, even when we don’t please them right away.
Yet I find myself, day after day, being glad that they forgive me for my mistakes.

No one can quite forgive like an animal nor remember why they always love you.

Pretty sure that they have 50+ ways to look at me, and all are a variation of “You idiot.”
Even though I know they won’t be here forever, I’ll remember each one.
There is always more room in my heart for another member of my family.
So I must remember to write about them in all the little ways.

Remember to check out the original Thankful Thursday.

This week I am thankful for:

The best of friends 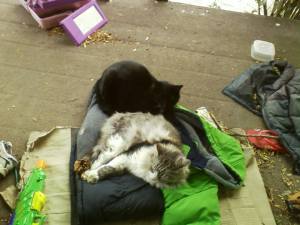 Peace at home, goodwill between cats and dogs 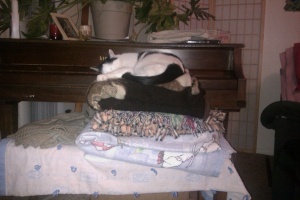 Curiosity is better with siblings 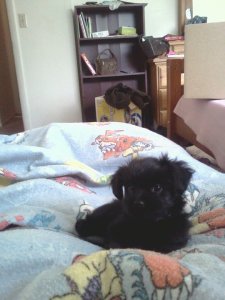 Really, I’m grateful for animal family members today, both past and present.

Since last Thursday I have decided that I like this prompt. No, I don’t like it, I love it and I need it. It really turned my day around and I was better for having found it. So I decided to do it again!

I am thankful for:

Peace between mother and daughter

Peace between siblings
(they both belong to my sister)

Again I post only a small collection of things I’m grateful for and I look forward to this next week. It really gives me a better view on my life!

Be sure to check out the original Thankful Thursday for this week’s edition: http://mithriluna.wordpress.com/2014/05/08/thankful-thursday-mothers-day-gratitude/comment-page-1/#comment-1985

There have been mentions of animals in the news. There have always been mentions of animals in the news and this is a trend that will likely continue. I honestly can’t think of a reason why there wouldn’t be. These animals, whether they be exotic or wild or domestic seem to speak to us in a way that means we can’t ignore them and their own feelings and thoughts even though we don’t understand their own language.

I was going through my bookmarks on my laptop (I have way too many) when I realized that I had a lot about animals. I won’t mention them all in here, but it didn’t surprise me at all just how much animals are talked about online. I know that I love reading about them and talking about them and looking at pictures about them…

Anything to do with animals really makes me smile or cry.

(And as I sit and write this my cat Usako is staring out the back door, with occasional glances in my direction, just waiting for her mother Cotton to want back in.)

It has been mentioned that I should write about my favorite family pet in my life. I can’t pick one, unfortunately, because each animal member of my family, past and present, have been my favorite for this or that. Their personalities are very different, just like the human family members that I have.

My favorite mothering pet was Ginger, a husky-golden retriever mix who was absolutely convinced that my younger siblings and I and some of our friends were her puppies. She would try to get us to eat this or that and drink and would shoo us into her doghouse when it was nap time before curling up around us to make sure we were warm enough.

My favorite teddy bear pet was Taffy, an orange tabby that followed me everywhere when I was a toddler. He let me cuddle him however I wanted. Unfortunately this meant that sometimes when I’d wonder off after a nap I would tug him along with by his tail or a paw. Mom says he was totally fine with it and thought I was awesome.

My favorite guard dog/exercise trainer was Rascal, a black mutt who my brother brought home from the street after he’d escaped previous owners who were not good to him. (No one ever came to claim him, so he was ours.) He was super protective of our family (especially Mom) without actually attacking people. (With the exception of my dad after our parents divorced.) He never actually bit anyone that I can recall and he thought that Mom was the most precious person in the house. He also ate everything except carrots.

My favorite ambush pet is Usako, my tortoise shell cat. She is absolutely awful at actually attacking anything. She is not the cat that defends her territory. She is excellent at waiting for the right moment to strike and then dashing off before her victim can retaliate. She’s also great for cuddling at night when it gets cold. She manages to do that without making it hard to breath and is as soft as a bunny. (She also likes salt and vinegar chips and low-sugar sugar cookies.)

My favorite boss pet was Tommy, a grey tabby long-hair. He would often glare at me until I went to bed. He had something like 60+ different looks that all boiled down to “Why are you doing that? Stop being an idiot.” That cat saved my sanity in my teen years when a lot of crap went down for my family. He was always very good at curling up on my back with just the right amount of warmth and weight to ease the tension running through it. (I had a lot of trouble with my back and neck during my teen years and he was one of the best parts of my physical therapy.)

I really can’t pick out of those mentioned and I have too many to write them all down. Each animal that my family has had have been a part of us and integral to our continued health and growth as people and as a family. They protect a part of our hearts and souls in a way that humans aren’t always able to do.

Not all families are the same. Some have all boys or all girls for kids or some kind of mix, unless there is only one child. Some children are adopted and some are fostered if they’re not born into it. And then there are the ‘children’ that aren’t even human.

My family has always had some kind of animal family member in residence if we were at all able to do so. The times when we didn’t have a non-human in residence were usually the worse times for any of our health, mental, emotional or even physical. this is kind of true even after my siblings have grown up and moved out on their own or even started new families. They have taught us patience and compassion even when they are being their most trying.

My current non-human child is a tortoise-colored cat (I hope I got that right, I spent a few years under the misapprehension that she was a calico laughs at self). Her name is Usako which means bunny because when she was born, her ears were as big as they are now that she is a full-grown cat. They did not grow, she grew into them. She also had this habit of jumping higher than you’d think even a cat could jump. She works hard to train me to be more patient and considerate of others as well as pay more attention to what it is that I do normally during a day.

I had a friend’s family dog nip at me today, which is kind of what prompted this post. He had already warned my sister and I that he wasn’t up for people being near him. I was foolish and ignored his silent warnings and body language. He headbutted my outstretched hand and barked at the same time. I had a bruised knuckle that is still sore, but has finally gone down enough so that I can use the hand better. He could have bitten my hand and done some actual damage. He didn’t even break the skin on my knuckles. After he’d given his final warning, he allowed me to back off, but kept a wary eye on me the rest of the time I was there. I finally smartened up and took his warning.

I don’t blame the dog at all. I wasn’t the best little girl around this friend’s cats growing up. I wasn’t the worst, but as a child I liked to startle them. They never clawed or bit me for it (unless I managed to get my hands on them, and even then, they only clawed enough to escape.) I ignored this dog’s warning and so he had to give me another one. He could have hurt me, but he didn’t and I’m pretty sure he did so on purpose. He was as much a part of his family as my cat is to mine. He’s person whose boundaries I had ignored even after being asked to back up and give him some space.