He watched over the people below. They were hurrying about, no one really paying all that much attention to anyone or anything around them. It was easy for them to ignore the unwashed children with empty bellies, the disabled veteran sitting under an awning with everything he owned held in a beat up backpack and his only friend a happy-looking but equally dirty dog. The garbage on the streets was ignored just as easily and the teens sneaking around the edges of the allies looking furtive were only glared at before, like everything else, ignored.

If any of the children, veterans, teens or garbage on the streets and sidewalks got a glance it was one of derision or disgust. There was no kindness happening or people giving one another a smile and a nod as they passed.

He gazed down in triumph, knowing that he had won this town fair and square.

Well, he giggled darkly, he hadn’t really played fair but it’s not like he cared all that much about such a thing anyway.

All he cared about was winning in the first place at any cost and sometimes, the cost was the best part of the bargain.

He loved watching each and every one of them fall to his carefully planned traps and loopholes. It was delicious seeing the realizations in their eyes, feel the despair curling up in their hearts and souls and the darkness grow ever stronger in their minds. 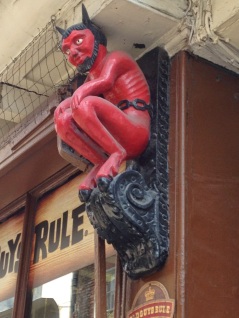 Also, because I just feel a little down today for some reason. Just tired is all.